You’ve had a brief introduction to healthful eating and know that our body is a machine for creating consciousness from food. Let’s see how that works from the Ayurvedic perspective.

The ancients saw that through the action of the digestive fire and its subsidiary agents the food we eat is progressively refined in a precise sequence from one type of tissue (Dhatū) to another. Western science recognizes these same tissues along with others, but does not have the same understanding of their inter-relationships or of the primary importance of good digestion and metabolism. 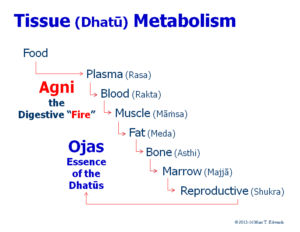 The digestive fire, termed Agni, mirrors the Sun. It burns most strongly at mid-day and is weaker in the morning and evening. That’s why it’s best to have your main meal at noon. A large meal or heavy food taken in the early morning or late evening is a recipe for creating Ama—the toxic products of improperly digested food. For example, cheese and yogurt, which could be healthful when taken at mid-day, are too heavy to consume in the evening without risk.

The initial digestion of food into its constituent elements occurs in the hours following a meal, but the transformation of one tissue to another takes place primarily during the night while we sleep. This is one reason that a regular routine that provides sufficient sound sleep is so important for health. Eating late at night interferes with this process by diverting resources to the stomach.

Ojas Nourishes All the Tissues

From reproductive tissue comes Ojas, the final, most subtle product of digestion and metabolism. It is only found in humans. It is responsible for intelligence, immunity, vitality and strength. There is said to be a cupful pervading the body and 8 drops in the heart. It represents the essence of the Dhatūs. It has a unifying value that nourishes the entire physiology and enlivens its connection to the ultimate source of life: transcendental pure consciousness.

Ojas is depleted by excessive exercise, too much sex, fatigue, a rough or raw diet, alcohol, trauma, over-exposure to the elements, and emotional stress. Sound familiar? Aren’t these behaviors that commonly lead to illness? Conversely, production of Ojas is enhanced by love, the experience of bliss consciousness, pure foods, and Ayurvedic therapy.

A totally pure nervous system which maintains the experience of transcendental consciousness along with waking, dreaming or sleeping (Cosmic Consciousness) can convert Ojas to Soma. Soma is the “nectar of the gods.” It functions as the “glue of the universe” by connecting heaven and earth. The flow of Soma refines the organs of perception and enables the appreciation of the finest level of manifest creation (the Celestial), such that every sensation rises to become a wave of bliss in God Consciousness.

It is highly significant that the digestive fire is known as Agni. To put it in perspective, consider that Ayurveda, the Science of Life, is just one little piece of the whole of Vedic knowledge, which is expressed in seed form in the Rk Veda. In turn, Agni(m) is the first word and seed form of the four primordial Vedas (Rk, Sama, Yajur and Atharva). This is why eating is equivalent to making a sacrificial offering to the exalted force of nature expressed in your stomach, the Sun and the entire creation. It may be the common source from which most spiritual traditions came to advocate taking time for a prayer of gratitude before starting a meal.

Thus, the main lesson about tissue metabolism is to protect your digestive fire so that it’ll make Ojas instead of Ama—nectar not poison. Next time we’ll look into the Ayurvedic approach to detoxification so that the imbalances and Ama that have accumulated this summer don’t cause problems in late fall and winter.

Marc is a Family Physician who has studied, practiced and lived Ayurveda over 30 years. View all posts by Marc Edwards

This site uses Akismet to reduce spam. Learn how your comment data is processed.