A Vāstu home needs all the amenities of modern living including indoor plumbing, HVAC and electricity, but emphasizes non-toxic, environmentally conscious systems. Looking to the future, I’ve rejected propane as an energy source in favor of a geothermal heat pump.

Successful installation takes careful planning and the builder’s diligent oversight. Vernon has been a wonderful partner in this process. My home design relegated plumbing and HVAC to the crawl space. Vernon carefully supervised the grading to assure adequate headroom in the critical space. Even so, as you can see, it’s not a friendly environment for the claustrophobic! 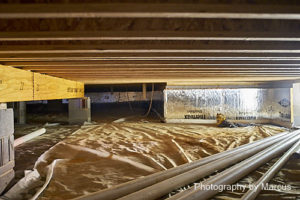 Plumbing rough-in started on October 25. Vernon made sure the vent stacks exited the west side of the roof so as not to be visible from the entrance.

I generally prefer to shower after my morning Abhyanga, but love to take an occasional deep soak, particularly in winter or as part of seasonal detoxification. I hate to tell you about my struggle to find a deep enough tub. It needed to fit the available space. I was tempted by the potential aesthetic of a free-standing tub, but couldn’t find any reasonable cost option superior to the Mirabelle alcove tub I finally chose.

I also learned that many tub faucets deliver only 2 gallons per minute. Although my tub only holds 48 gallons, I don’t want to wait 20+ minutes to fill it. After further searching, I chose a Hansgrohe wall-mounted set that delivers 6 gallons per minute – if plumbed with 3/4″ pipe.

The Orange County plumbing inspector just finished when I arrived on November 3. We passed without issues. He filled the showers and bathtub to test for leaks. He also pressurized the water lines to 100 psi. You can see the pressure gauge in the photo below.

Peb Stone, the electrician, was busy at work when I arrived the morning of November 8 to meet with Vernon. He’s been doing electrical work since age 15 and had a wealth of knowledge to contribute to the discussion. Peb validated that Vernon is a master of detail and builds each home as if it was his own. We spent a good two hours validating and adjusting critical box placement, debating options for a subpanel, etc. I opted to leave the subpanel in the garage near the main panel and use it to segregate the primary circuits needing backup power in the event of a prolonged outage. That strategy also helped to mitigate any potential issues with EMF radiation. 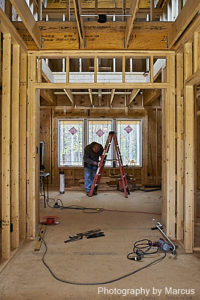 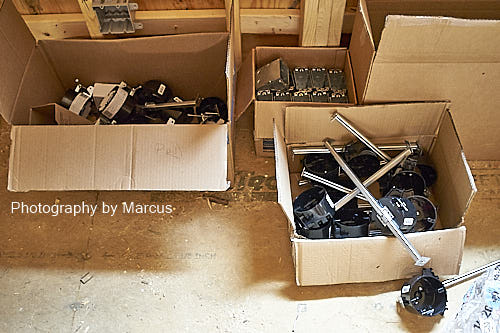 Electricity, magnetism and EMF (electromagnetic field) radiation pervade our modern world. We take for granted the convenience of Wi-Fi, microwaves, cell phones, radio, broadcast TV, etc., but give little attention to the potential affects on health beyond the danger of distracted driving. We’ve long known of the risks of high energy EMF radiation (X-rays & Gama-rays). The effects of low energy EMF sources common in the home environment remain uncertain. The German Building Biology Institute recommends EMF precautions along in its 25 Principles for healthy home environments. Other recommendations address air and water quality, the use of non-toxic materials, etc. Their suggested evaluation guidelines focus on sleeping areas. We spend an average of 8 hours per day in the bedroom. Sleep restores vitality to brain and body.

Considering that the benefits of Vāstu are largely experienced in terms of better brain function, I felt it was reasonable to pay attention to this issue. Since I work from home, my priority was for the primary working as well as sleeping areas. It turns out that the building code goes a long way toward mitigating the risk of electrical fields induced by currents in neutral wires, which can frequently be found in older homes. In new construction, dimmer switches are a major source of fields, so I minimized their use. As additional precaution, I specified armored (MC) cable for the walls adjacent to the heads of beds, my office desk and my meditation room. The metal cladding of MC cable blocks the propagation of any fields that might be produced from the flow of electricity through the wires. It’s significantly more expensive than conventional Romex, so I did not use it house-wide.

Given my commitment to electricity as an energy “currency” (see HVAC Design), the only major compromise I had to make was in the choice of an induction range for the kitchen. Electromagnetic induction is rapidly replacing natural gas even in commercial kitchens. It is the most energy efficient method of cooking. Moreover, it offers precise and quick temperature control without combustion by products. That means less moisture and no risk of carbon monoxide or explosion.

With induction cooking, the electric energy gets converted to heat by the metal of the pots & pans through their interaction with a rapidly alternating magnetic field created by the cooking surface. The surface itself stays relatively cool (less risk for burned fingers) and is easy to clean. Given all these benefits, I was willing to accept the EMF exposure that comes with the method. I did, however, use my EMF meter to test an induction cooktop in an appliance showroom to get a feel for the variation in field strength with “burner” intensity and distance.

The electricians needed to find an optimal path for home runs to the panels, which will be located in the northeast corner of the garage. It is easy to go across the garage ceiling between the trusses to get to the main living area. The trick was to find a place to access the crawl space for feeds to baseboard outlets.

I didn’t want the northeast wall of the mudroom to serve as a chase. Not only is it effectively an outside wall, but it may serve as a project area. A mass of wires running between the wall studs would potentially create unnecessary EMF radiation nearby. The solution shown below left was to use the hallway (north) wall of the guest bedroom closet. The other photos show how the structure elements of the framing served as a notepad to guide the work.

Similarly, I decided to invest in Ethernet wiring throughout. That way I can benefit from optimum signal strength and make wireless connections optional. Following current trends, I’m using category 6 Ethernet cable for the phone system. That should future-proof the home for technology. Even so, I opted to install RG6 coaxial cable in places that might warrant a radio or TV. While it’s already looking obsolete for cable TV, it can still serve to distribute signal from an FM attic antenna.

My sound system has moved around the world with me. It includes a link system that enables control of the sound source from two additional locations. To simply its installation, I preplanned with Vernon to install “Smirf” tubing and junction boxes in the desired locations. We also pre-wired for speakers in the kitchen and west porch to be directly controlled from the stereo system.

HVAC is the primary energy hog in most homes and a huge factor in comfort and livability, so I gave it a lot of attention. Looking to the future, I’m betting that electricity will become the dominant currency over oil & gas. I also believe we have an obligation to pay attention to energy efficiency. Insulation and air tightness are big factors along with choices of roofing material, roof overhang and windows to minimize summertime heat gain.

My home design called for 6″ stud walls. That is adequate for the climate. I wasn’t prepared to complicate the design or increase cost with super thick walls that make more sense farther north. While heat pumps are widely used in North Carolina, they are not very efficient for winter heating when the temperatures drop to near freezing. I didn’t want a dual-fuel unit. That pushed me to choose a geothermal heat pump, even though the federal tax credit are not longer available.

It’s going to cost about double that of a conventional system, but I believe it’s the right thing to do. The required wells account for about half the cost. They are likely to last 100 years if not longer. The mechanicals should last much longer than a conventional system that is exposed to the elements. I want this home to continue to have a positive influence on its occupants and the environment long after I’m gone.

When I arrived on the morning of November 17 to meet with Vernon, the house was a beehive of activity. I found four electricians and two HVAC installers. Here’s a photo of Ramos posing at the kitchen hood vent he was working on. Ramos came to the US about 16 years ago. He’s worked for Boer Brothers most of that time. Vernon is his favorite contractor. They treat like family. He’s now a US citizen and married with three kids. His wife runs a cleaning business that specializes in construction services.

He and others I talked with love the feel of the home and enjoy their work, even if they have to get down in the dusty crawl space to run ducts or wires. At the groundbreaking ceremony, I made a wish that the project would bring happiness to all involved and inspire them to deliver their best craftsmanship. I’m delighted to find my desire is being fulfilled.

Even with advance planning, once implementation reaches a certain point, the impact of the situation may call for a refinement. For example, we knew all along that the minisplit compressor for the workshop would need to sit on a concrete pad. The initial decision was to locate the air handler above the door so that the compressor could be place out of sight on the garage entry side of the home. Then, we figured it was better to place it to the west of the shop door than to the east. Next, we confirmed that there would be enough space to accommodate it along with the electrical and communications service entrance. Finally, we realized that the pad could be combined with a threshold for the shop entrance.

Similarly, in the kitchen design, we examined multiple options for the placement of sink, range and refrigerator. All this was done within the framework of Vāstu constraints. Once I settled on having the range on the east between the windows, we needed to assure adequate clearance for a range exhaust hood between the window trim and to place it in the exact center of the space. At the time, I figured it would be simple to vent the exhaust from there to the outside. It turned out that code prohibits the vent from being placed in close proximity to windows. Vernon’s simple solution was to run it to the south gable end of the front porch. This not only complied with code, but put it out of view and avoided roof penetration.