Selection of electrical fixtures is at least as subjective as for plumbing. Beyond aesthetics, I set my primary criteria as functional illumination and energy efficiency. My electrical plan handled most of the functional issues. I focused on LEDs for their efficiency, but came to find many decorative fixtures come with a steep price premium for an LED source. The “incandescent” option is often a good bargain, even after factoring the added cost of an LED replacement bulb.

Over the course of the two years of planning for my home, I witnessed a revolution in recessed lighting. Initially, the cost of LED recessed cans was prohibitive compared to conventional cans with a screw-in LED bulb. By the time I was ready to wrap up the electrical plan for the sub-contractor, thin ceiling-mounted LED lights had become a better choice. I particularly liked the fact they only required a simple 4” round ceiling box. This not only provided future flexibility, it had the added advantage of playing well with dense-pack cellulose insultation.

While Ferguson sales consultants were knowledgeable and helpful during our initial face-to-face meetings in the showroom, I found them difficult to consult for follow up questions via email or voice message. It helped to schedule a phone conference. Even so, in the selection of electrical fixtures, the showroom was of limited value. So many choices were available that I still had to consult product catalogues and online sources. Ultimately, I got better service and support at Build.com. Ironically, Ferguson has a stake in them.

As much as I liked the Kichler downlights that my Ferguson rep had used in building her own home, the newer models were more sleek and energy efficient. Unfortunately, the one I liked the most at the time we were ready to purchase required an octagonal box. Luckily, I discovered that a competitor’s offering had just been redesigned to fit a 4” round box. The price was irresistible. It took some double-checking because Build.com’s website had not yet been updated with the new model information: WAC FM-166G2-930. I still used a few of the older Kichler lights where “wet-location” rated fixtures were required: showers, front porch and workshop entrance.

In developing my electrical plan, I waffled on the choice between downlights and ceiling-mounted fixtures in several locations. The option to use LED downlights on a 4” round box allowed me to delay the decision until after the sheetrock was up. I ended up staying with LED downlights everywhere except locations where I wanted I specific look or function:

In the first three areas, I had fixtures that I planned to re-use. My Ferguson rep identified a nice, bright LED utility light for the garage and workshop. That left a limited number of decisions. Besides aesthetics, I was careful to maintain a uniform color temperature (3000° K) throughout. 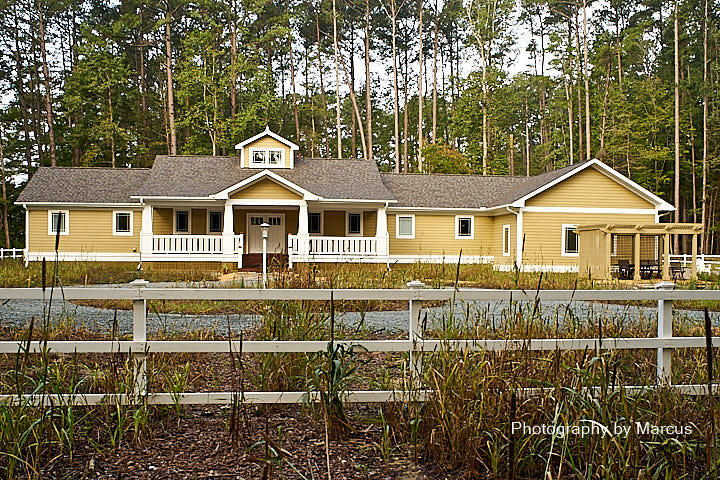 I’m a minimalist when it comes to outdoor lighting. I love to look at the stars and am bothered by light pollution. On the other hand, I wanted to assure adequate lighting for safe navigation of the driveway and front stairs at night. I was able to achieve this with 3 matching fixtures in the Hinkley Harbor series: a hanging lantern on the front porch and matching post lights on the circle drive and main gate. I had more trouble getting my supplier to source plain white aluminum lamp posts of adequate length without a photocell or cross-bar. I wanted the lanterns to sit about 6′ above grade. She finally came up with an 84″ pole from Seagull that was close enough. 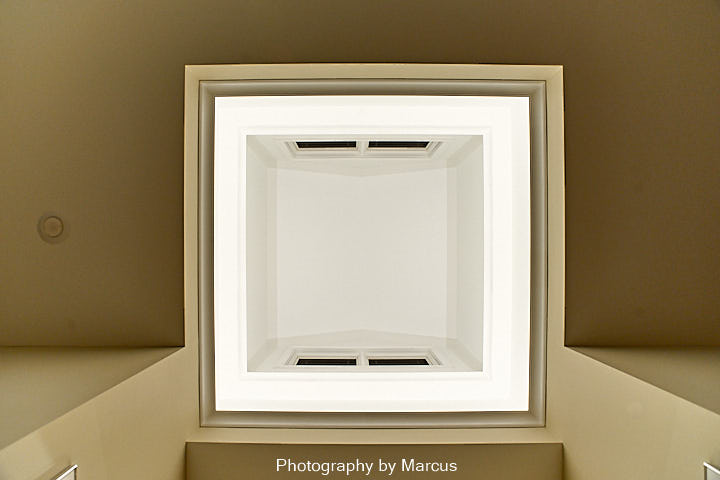 The cupola is a focal point of the home. My architect designed a soffit to add a sense of depth that could be illuminated if desired. So, I specified a switched outlet hidden from view that could be used for the purpose. The area is about 8′ x 8′. My lighting consultant came up with a simple LED tape in 16 ft. lengths that worked perfectly. Vernon helped me lay it out. It wasn’t difficult to wire the tape to the transformer and plug it in. 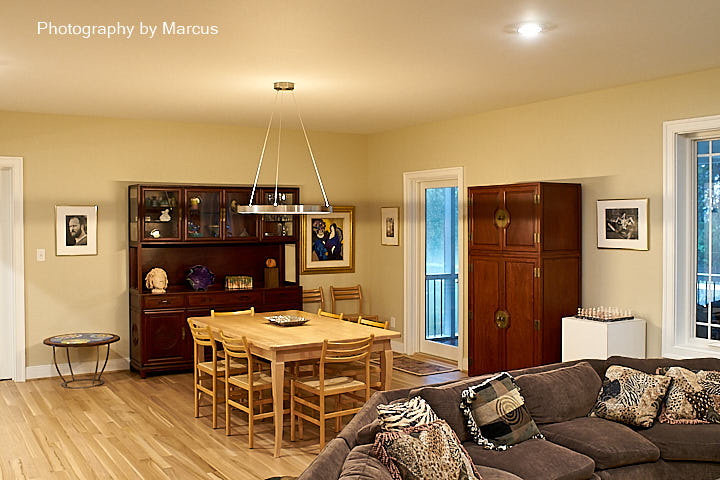 I went with a modernistic LED-ring light to go over my Birdseye maple dining table. Paradoxically, the 30″ diameter Tech Bodiam was inspired by medieval cast iron ring candelabras.  Regardless, my main concern was that it wouldn’t generate glare or annoying twinkling, so I read a lot of product reviews. I find it gives comfortable illumination without the need for a dimmer.

I decided to stick with the brushed nickel finish that I chose for door hardware for most of my light fixtures. In the kitchen, I went with classic Halophane after learning the history of its design to reduce glare in factories. The Hinkley Elroy model I selected was subsequently discontinued, but is still available from resellers. That opened the door to use the retro Hinkley Pullman over the sink.

In the guest bath, I chose a pair of sconces to flank a modest vanity mirror. Side-lighting is more flattering to the face than overhead illumination. Even so, I felt a larger mirror would be warranted in the master bath. That meant using an above mirror light. I cycled through many options and finally landed on the Hinkley Simi 32″. I was apprehensive that at 3800 lumens it would prove to be too bright. That was naïve. When you want light over your vanity, you want a lot of it. Otherwise, the LED downlights suffice.

Above the tub, however, I wanted a softer mood light. I found something completely different from Justice Design Group. It’s unglazed ceramic bisque. I thought of painting it the wall color, but Vernon cautioned that it would be difficult to get a perfect finish with all the little holes. Anyhow, the clay bisque  harmonizes nicely with the wall paint.

In this climate, many are fond of ceiling fans for comfort in lowering cooling costs in summer. This was less of an issue for me given my geothermal heat pump, so I focused on budget and aesthetics.

Some argue for a ceiling fan in every room. I thought this would be overkill. I only saw the need for fans on the west porch, in my office and the guest bedroom. Still, it was easy to wire switched fan boxes in the right locations throughout the house. I’m glad I did. It gave me the option to install LED downlights in the master bedroom, meditation room and living-dining space which have proved useful.

Given the large size of the porch (about 480 sq. ft.) and the height of the ridge (about 11 ft.), I researched guidelines for determining fan and downrod sizing to assure that the unit I selected would be up to the task. It took some work, but I finally settled on the Montecarlo Avvo Max in rubberized white and got an 18″ downrod. It’s 64″ in diameter, has an integrated LED downlight, and will crank out a comfortable 3000 CFM on low speed at 55 RPM using only 3.3 watts.

For the guest bedroom, I selected a modernistic white Minkaire unit (model F844) with integrated LED. The light was important since there aren’t any ceiling downlights in the space.

I didn’t give surge protection much consideration until I received a solicitation from Duke Energy for a behind-the-meter leased unit with $10,000 of insurance coverage. My understanding of Duke Energy’s profit motives impelled me to investigate the situation. I found that you can get a panel-based surge-suppressing breaker that offers protection from both internal and external sources of current spikes.

Vernon ran the idea by the electrician, who endorsed the idea and recommended an Easton BR230SUR. The total cost of the installation was comparable to 1-2 years of leasing from Duke, although I don’t get the insurance component.

The electrician installed the surge-breaker on the water heater circuit. In retrospect, it would have been better on a different 240V 30A circuit like that for the clothes dryer. The water heater is the one circuit I would like to be able to shut off in the event I take a long vacation. If the breaker is off, there is no surge protection. While I could still use the breaker at the water heater in the crawl space, I’m working on getting that fixed.

When it came time to add outlets for phone, ethernet and co-axial cable, I got shocked by $3,000 quote from a potential sub-contractor. I figured that I could do the job myself for a few hundred dollars in tools and cost of the outlets. Along the way, I picked up a few tips from a home automation guy who’s done work for Marlene.

I’m glad it did it myself. It wasn’t difficult. At heart, I’m a do-it-yourselfer.  I enjoyed learning more about how these systems work. Moreover, now I have the tools to troubleshoot and make repairs.

My biggest Eureka was discovering that an ethernet wall jack can also accommodate the smaller phone jack. That means I can easily repurpose a cable simply by changing the inexpensive modular connector in my equipment closet. By the way, yes, I still find it useful to have a “land line.” Mine is really a VoIP subscription service that very effectively blocks robocalls.